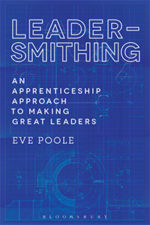 Eve asked us to launch her latest book, “Leadersmithing”, published by Bloomsbury. The main objective was to raise awareness of the book amongst leaders, managers and business schools. The PR also needed to support sales and boost Eve’s position as a leadership expert.

We analysed the key angles from the book to develop a PR campaign targeting influential leadership and management writers in titles such as the Financial Times. We also tied some of Eve’s key messages into the current news agenda to show the book’s topicality. In this instance, we chose the lack of manners in leadership discourse in business and politics.

We wrote a press release and pitched tailored news angles. We also distributed a specially commissioned deck of playing cards to key journalists. These highlighted 52 weekly exercises from the book that people could follow to become a better leader. We also supported Eve in preparing for a TEDx talk that we could use to brief journalists.

The PR campaign achieved excellent results. Eve was interviewed on the issue of “Manners in the Workplace” by BBC Radio 4’s Women’s Hour programme, which has some 3.7 million listeners. She was featured in a double-page spread in the Financial Times within their annual Business Education Rankings Supplement. We also secured a four-part series of articles for her in HR Magazine, amongst other press coverage.

The coverage has been used as content and shared on Twitter, LinkedIn and Facebook. It has generated secondary commentary both on social media and in Campaign magazine. As a result, views of her Leadersmithing TEDx have topped 1,500. Eve is consistently in the Top 10 training books on Amazon. Her number of Twitter followers has also increased noticeably.

If you’ve got a book or research project to promote, book a one-hour discovery call with us to see how we can help you.